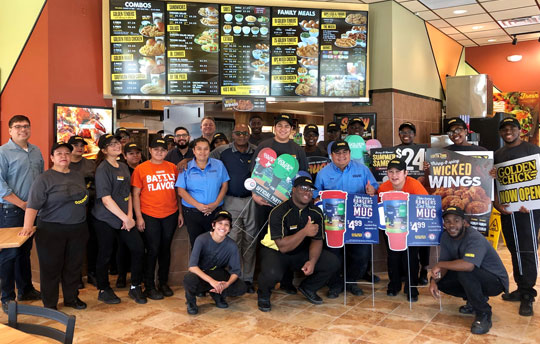 Last year was an exciting one for Golden Chick! We’ve been a leader in our industry since opening in 1967, serving the best-tasting chicken and a menu that’s beloved by young and old alike. While we’ve been busy, we’re looking forward to more growth – consider opening a fried chicken restaurant franchise with Golden Chick and help us achieve our goals!

At the close of 2021, Golden Chick has 210 locations across Texas, with a 55-restaurant commitment in the works for the Houston area, another 35 in West Texas, 40 restaurants in North Texas, 20 locations in the Las Vegas area, and more locations in 6 Southern states. We’re extremely excited by this growth and the opportunities these expansions bring for our franchisees!

Our Year in Review

To start the year, Golden Chick ranked #302 on Entrepreneur magazine’s Franchise 500 for 2021. We jumped 32 spots from last year! We furthered our collaboration with Cholula hot sauce and expanded our hot sauce-inspired menu with the Cholula Mac & Chicken Sandwich and Cholula Mac & Cheese.

In February, Golden Chick franchise unveiled a new modular prototype to allow for mass expansion with lower franchisee costs. This latest prototype is designed to make both building and operating a Golden Chick location easier and more affordable for franchisees. We also introduced a quartet of seafood specials, including our new Beer-Battered Alaska Cod Sandwich as part of our 2021 seafood menu, just in time for lent.

Golden Chick’s president, Jim Stevens, was featured in an article by DMagazine (Dallas), where he discussed how the cancellation of the Texas State Fair in 2020 led the helm to help save the Corny Dog. Golden Chick would go on to sell out of Fletcher’s Original Corny Dogs at every single location during the weeks that normally host the State Fair.

September brought the rollout of our Boneless Wings for a limited time . . .and by November, we decided to keep Boneless Wings on the menu until the end of 2021 by popular demand.

We made key leadership moves with the promotion of Julie Burt to district director, the hiring of Nayely Casillas to certified field trainer, and the hiring of Lindsey Orenstein to brand marketing director. Golden Chick also announced that we are continuing our menu innovation with the testing of our first plant-based product – Beyond Chicken® Tenders.

The Golden Chick brand has enjoyed tremendous growth, making us a leader in the fried chicken industry. Our name has become synonymous with recognition and respect, and our customers trust it to mean wholesome, affordable chicken. This is greatly due in part to our franchisees.

We’re proud to be a leader in a robust and crowded industry, and as a nationally recognized brand, Golden Chick helps our franchise owners get ahead of the competition. When you partner with us to open a restaurant franchise, you can count on industry expertise and ongoing support. We’re dedicated to helping our franchise owners find success.

There’s no better opportunity to consider than opening a fried chicken restaurant with Golden Chick.

Golden Chick is the top franchisor in the fried chicken restaurant segment and we’re growing! To find out more, get in touch today!

Previous Post: « Celebrate the Holidays with Our Limited Time Offerings
Next Post: Is 2022 the Year You Make a Career Change and Open a Franchise Restaurant with Golden Chick? »

Your Grand Opening and Beyond

Whether you signed your franchise agreement and paid your initial franchise fee at Discovery Day or sometime soon after, we can now get started with the process of making your Golden Chick restaurant a reality.
There’s a lot involved in opening a Golden Chick restaurant. Our decades of experience give us unique insight into the steps of the process and we’re able to guide our franchisees through every step, including but not limited to:

These are just a few of the ways we simplify the process to assist you to achieve a successful Golden Chick restaurant opening.

Then, we’ll continue to work with you as your business grows, providing you with ongoing training and guidance.

You will be invited to the Golden Chick Support Center to meet senior team members that head up corporate support functions such as training, marketing, operations, construction and supply chain. This is a great time to get answers to any questions that you’ve yet to ask. This is the team that has the answers.

Time is set aside for a one-on-one discussion with members of the Executive Team to get to know you, and you them. If the parties agree, Discovery Day will end with the signing of your initial franchise agreement.

During Step 3 you will contact as many current franchisees as you like. Ask them about their experience with Golden Chick, “why they chose the brand”. How long to build your Golden Chick? What should I pay my manager? Get the answers to your questions from Golden Chick operators that live the brand every day.

Next you will prepare a financial proforma for your proposed Golden Chick. We will provide you a format and guidelines that you can complete or enlist your accountant/financial advisor’s help. It is important that you understand the P&L, and your lender is going to want to know that you understand the numbers as well. Once completed, we will review together to ensure that your expectations are reasonable and realistic.

Early in the process it is important for both parties to learn about each other to ensure that our goals are aligned and realistic. It is critical that potential franchisees are a good fit for the Golden Chick culture and process. You should walk away from this discussion feeling that you want to proceed to the next step.

If it seems like we’d be a good fit, we’ll take some time to review the details of the investment with you. You’ll be provided with a copy of our franchise disclosure document (FDD) which breaks down everything you need to know about starting a quick-service restaurant with Golden Chick. While you’re reading the fine print, we’ll learn more about your background and ensure that you’re well-qualified to become a franchisee.

Hosted by an Operations Training Specialist, you will attend an introduction to Golden Chick operations providing you with an overview of the restaurant layout; key employee positions in a typical Golden Chick and their responsibilities; products, systems and much more.

We want you leaving this 4-5 hour overview with an understanding of what it takes to deliver on the Golden Chick experience of friendly, helpful service, delicious Golden Chick meals and a clean and sanitary facility. Given the current environment, this was never more important!

Once you contact us, we’ll be in touch soon to provide you with more details about our brand and the investment. We’ll want to know more about you and your interest in starting a Golden Chick restaurant, and we’ll let you know the basics.